Everyone was a winner at AGQUIP

Home/Uncategorised/Everyone was a winner at AGQUIP
Previous Next

Everyone was a winner at AGQUIP 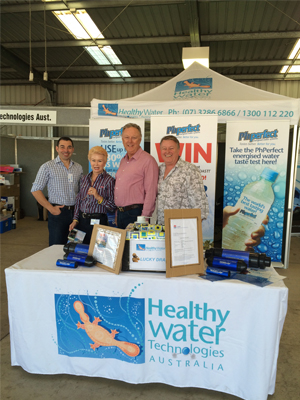 This years AGQUIP sponsored by the Commonwealth Bank in Gunnedah was an epic event.  Healthy Waters Technology Australia fielded a full complement of crew for the three day event.  When we say epic we mean epic.  Over a 100,000 patrons sauntered through the endless isles of goodies dished up by hundreds of commercial operators.  What we learned confirmed what we already knew about the importance of our products to all living things.

The people we met were warm, friendly and most of all informed about the true nature and importance of water.  On a few occasions people desperately trying to understand the meaning of their water testing reports approached us to consult with them about their options.  One particular report showed a ‘copper’ reading 7 times the maximum allowable amount in his ‘tank’ water.  This guy was right next to a mining complex near Narrabri.  A day earlier a family of 4 had all been blood tested after one of then had received a dangerously high ‘copper’ reading in their blood.  It turned out that the entire family was suffering from copper poisoning.  It didn’t seem to matter where they got their water from they all had similar issues.

We met one gentleman that owned a substantial cattle property who confirmed that he had a stream running through his property and that the best water available there was the water found at the bottom of the running stream.  He knew this and his father knew this.  He stated that when he let his cattle into the paddock where the stream was they always drank the water from the pond at the bottom of the stream.  Hereby proving that natures best water is found in or at the end of a running stream, the action which our Edge devices simply duplicate.